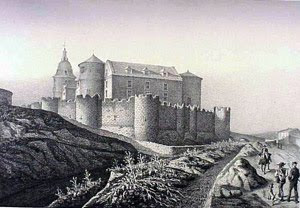 Das Schloss (pilar d’u sense folre ni manilles)
In one week she built the north side of the castle using Süddeutsche Zeitung’s international pages and after screaming ‘give me no affliction’ seven times walls got solid and she could start working on the east, south and west sides.
The following week an owl said to her that down there lied a treasure, so she started digging with two quite well amplified e-guitars and that hole became a big swimmingpool.
After three weeks she finally realized that all this had nothing to do neither with Captain Toby Shandy nor with Land-Surveyor K. —nor with Rabi Sadok Ben Mamoun— and she will prove it to you while dancing on top of the watchtower.

Eduard Mont de Palol
Eduard Mont de Palol (Girona, 1976) studied Human Sciences and Anthropology. Since 2002 he has been collaborating as a performer with several choreographers and musicians Martine Pisani, Petra Sabisch, Arantxa Martinez, Isabelle Schad, Christian Garcia, Mil Pesetas). He has translated and published Boris Vian, Christophe Fiat and William S. Burroughs into Catalan, and some of his texts have been published in the poetic anthology Nueve fresquíssimos d’Espanya (Produccions Escopeta, 2009).

Lack of Words is Nature 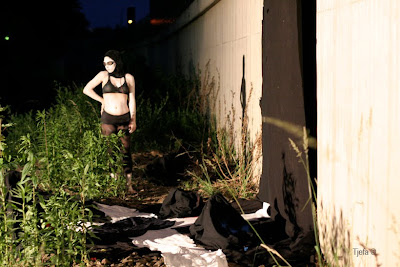 Immagini di Vetro Project
Immagini di Vetro Project was born in 2007, by an idea of Giulia Spugnoli and Mario Stagi, as research about performing with different semantic forms, to show the creative and communicative experience in the art process. Words, signs, vision, sounds, light, symbols, materials and colours in a new compositive logic. The result is a very colorful sychedelic projection and crazy electronic soundtrack.

Barbara Toraldo
Barbara Toraldo is a southern italian performer currently based in Berlin. She started experiencing movement in 2000 with African dance and Ballet. In 2004/05 she attended the “dance theater atelier” in the Scuola de Arte Drammatica Paolo Grassi in Milan. In 2006 she moves to Berlin where she meets contact danceand Butho. From this moment on her focus shifts spontaneously towards improvisation. Her performances are mainly with live music and reference to the influence of senses, subconscious and abstract images. 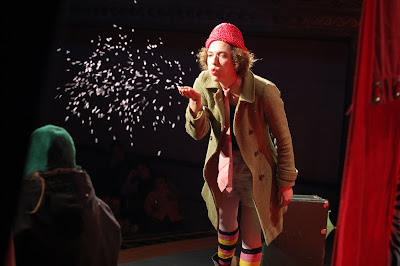 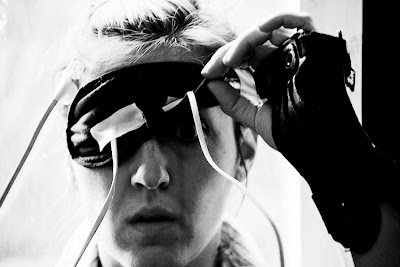 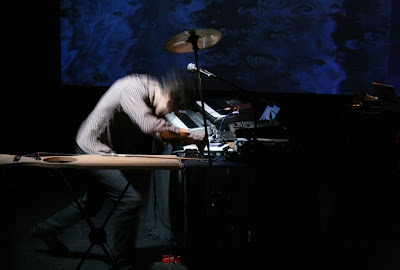 Program shortfilms
Anémic Cinéma
Anémic Cinéma (1926) is an experimental film made by Marcel Duchamp. The film depicts whirling animated drawings -- which Duchamp called Rotoreliefs -- alternated with puns in French. Duchamp signed the film with his alter ego name of Rrose Sélavy. Rotoreliefs were a phase of Duchamp's spinning works. To make the optical "play toys" he painted designs on flat cardboard circles and spun them on a phonograph turntable that when spinning the flat disks appeared 3-dimensional. He had a printer run off 500 sets of six of the designs and set up a booth at a 1935 Paris inventors' show to sell them. The venture was a financial disaster, but some optical scientists thought they might be of use in restoring 3-dimensional sight to people with one eye. [1] (Animated display of the Rotoreliefs). In collaboration with Man Ray and Marc Allégret, Duchamp filmed early versions of the Rotoreliefs and they named the first film version Anémic Cinéma.

Le Ballet Mécanique
Le Ballet Mécanique (1924) was a project by the American composer George Antheil and the filmmaker/artist Fernand Léger. Le Ballet Mécanique was originally written to accompany a Dadaist film of the same name, directed by Dudley Murphy and Fernand Léger, with cinematography by Man Ray. Antheil himself was not a Dadaist, though he had many friends and supporters in that community. Unfortunately, the score ended up being between 20 and 30 minutes long while the film was only 16 minutes long.
In concert performance, the "ballet" is not a show of human dancers but of mechanical instruments. Among these, player pianos, airplane propellers, and electric bells stand prominently onstage, moving as machines do, and providing the visual side of the ballet. As the bizarre instrumentation may suggest, this was no ordinary piece of music. It was loud and percussive –- a medley of noises, much as the Italian Futurists envisioned new music of the 20th century. To explore a fascinating artifact of modernist music like Le Ballet Mécanique, it is worth understanding its history and also its musical qualities.

Entr'acte
Entr'acte (1924) is a short film directed by René Clair, which premiered as an entr'acte for the Ballets Suédois production Relâche at the Théâtre des Champs-Élysées in Paris. Relâche is based on a book and with settings by Francis Picabia, produced by Rolf de Maré, and with choreography by Jean Börlin. The music for both the ballet and the film was composed by Erik Satie. For this production, the Dadaists collaborating on the project invented a new mode of production: instantanéisme. The complete film takes about 20 minutes using such techniques as watching people run in slow motion, watching things happen in reverse, looking at a ballet dancer from underneath, watching an egg over a fountain of water get shot and instantly become a bird and watching people disappear. The cast included cameo appearances by Francis Picabia, Erik Satie, Man Ray, and Marcel Duchamp.

Ghosts Before Breakfast
Hans Richter created the film Ghosts before Breakfast, also known as Vormittagspuk, in 1927. This was a silent experimental avant-garde film and it was the fifth film that he had made. The film itself is considered to be one of the first surrealistic films ever made. Richter's interest in Dadaism is shown directly in this work as he challenges current art standards of the time by presenting a theme of obscurity and fantasy. Clocks, legs, ladders, hats, and people undergo total irrational happenings in unusual settings. Men have beards magically appear and disappear before the viewer's eyes, hats fly around in the air, a man's head comes off and floats in the air, tea cups fill up by themselves, objects and characters move in reverse, men disappear behind a street sign, etc... . All brought together by associative logic, the flying hats perform this function by continually reappearing to the sequence of shots to tie the film together as a whole. This film digs into the viewer's mind for inner experience in thought and idea. It gives the audience a chance to release nervous tension when witnessing these abstractions shown through images. Richter tries to increase the viewer's knowledge of reality by showing them surrealistic fantasy. He accomplishes this through his use of rhythm, and his use of the camera.