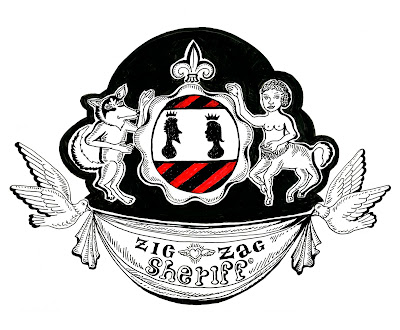 Zig Zag Sheriff
Zig Zag Sheriff is a co-production between two artists: Ivo Moreira & Astronauta Mecanico. This joint venture has started in 2010 and aims at combining the fields of action within which both artists have worked for more than ten years: drawing and painting + animation, video and live performance.
Zig Zag Sheriff is a organic and permeable project that wishes to adapt itself to the scenario were it is to be show. It is mostly a live performance project that includes video projection, animation, live painting/drawing, photography and music, either indoors or out on the streets. It is an exotic, sometimes awkward mixture of contemporary art, day-to-day life, the essence of celebration, partying and fun with a big dose of absurd humor.

Ivo Moreira
In 1997 he concludes General Course of Arts II in António Arroio High School. Between 1997 and 1999 develops his painting work under the orientation of the painter Luísa Soeiro, Ateliers Association of St. Paulo, in Lisbon. In 1997 went to Basel where works during three months in Daniel Boemle’s Atelier. Since 1999 he’s doing a residence in Galeria Zé dos Bois (Lisbon). In 2001 went to São Salvador da Baía (Brazil) where he works three months. In 2003 travel to India for one year. He settled there an atelier in a former courthouse of Panjim (Goa) where, during ten month, he develops his project “Enetic Studio” concerning to mobile atelier. In 2008 he applies for Fine Arts School (Portugal) where he attends for one year. Distinguish from his latest individual exhibition are “Solitude Park”, Open Studio, Point B, New York, USA, 2009; “Gifts From Where I Have Been” Part II, Sala do Veado, National Museum of Natural History, Lisbon, Portugal, (Cat.); 2009; “I Want to Go With You!”, Sala do Veado, National Museum of Natural History, Lisbon, Portugal, (Cat.), 2008.

Astronauta Mecanico
Astronauta Mecanico is the name of a live sound and video performance project developed by Veruscka Girio. Veruscka is a graphic designer, art director, multimedia producer, video screenwriter and VJ. She is curious about the use of computers as a tool in artistic production to create new worlds.
Veruscka Girio was born in Maranhão. She has worked in graphic design since 1994, as a web designer since 2000, and has fifteen years of experience as an art director. She lived in eight Brazilian states and two countries. Based in Sao Paulo, she works and develops projects across Brazil. Veruscka has been VJing since 2005 with original visual compositions and designing figurative panoramas and narratives. She has presented her work infestivals and electronic music clubs around the world. She has a personal archive of more than 2000 loops. Since 2008 Veruscka has been dedicated to working in the audiovisual field, manipulating sound and image in real time.
She is an artist working across a range of media: from drawing to programming, from paper to new media, from image to sound, creating a palette of frames for a never-ending film.