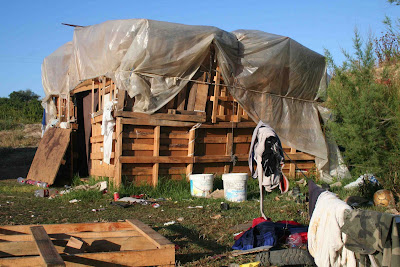 "When they need us they call us migrants,
but when we've finished the harvest we're bums
and we have to go"
Autofokus#4
Última parada: Huelva (Next Stop: Huelva), 2010. Spain. Directors: Veronica Frenzel, Clàudia Prat, Leonor Jiménez. Original languages: spanish and French, with german subtitles. MiniDV. Duration: 28 min.

Última parada: Huelva
It's time to harvest the strawberry crop in Huelva. Due to the crisis, an estimated 1,500 un-documented immigrants didn't find work last season. Clotaire, Ibrahim and Adama are three of them. From their shanty town, they watch 300,000 tons of strawberries roll by, to be sold in supermarkets all over Europe. Clotaire, Ibrahim and Adama don't earn any money, they are barely surviving. They are thinking about their next stop. The story of 21st century nomadism.

Veronica Frenzel
She was born in Munich in 1982. She graduated in Contemporary History and Political Science at Ludwig-Maximilians-University in Munich and is now doing a Master of Journalism at the Deutsche Journalistenschule. She works as a freelancer between Germany and Spain for different German newspapers and magazines.
Documentary films: Assistant Producer Out of Córdoba (Spain, USA 2007). Assistant Director This country makes me happy (Germany 2004).
Publications: Ein Jahr in Andalusien- one year in Andalusia, Ed. Herder, Germany, March 2010. Hiking guide Andalusia, Ed. Michael Müller, Germany, August 2010.

Clàudia Prat
She was born in Barcelona in 1984 and graduated in Journalism at the University Universidad Autónoma in Barcelona -2009-, she is a videoactivist. Right now she is working on a documentary film with journalist Ferran Sales.
She organized the exhibition Deb'ART about Arts and Journalism at Sala de Art Jove de la Generalitat, Barcelona (2009). She started the project Donesllop: video projection at the Festival L'Alternativa and at the meeting Encuentro X0y1 organized at the Andalusian Center of Contemporary Art.
Best shortfilm Award for Cadavre Exquis at the Workshop at Brussels Film Festival (2008). Co-screenwriter and co-director, together with Claudia Prat: Don't Forget, voces más allà del olvido (Don’t Forget) (2007). Award at the Festival Bauman in Terrassa -2007-
She did an internship at Televisión Española and at Zarafa Films.
She wrote the screenplay for Semillas para otra economía (Seeds for a different economy) (2004), produced by the Solidarity network of Catalonia.

A talk with Veronica Frenzel will take place after the film