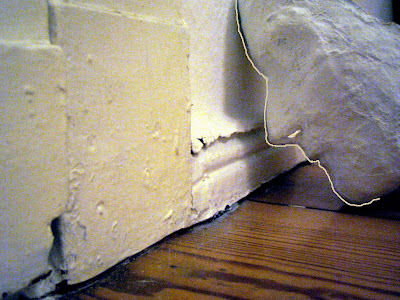 Staying Nowhere
This performance follows the varied emotional landscapes of a human life, investigating the transience and transformation of ourselves in space over time.

Mahela Rostek
Mahela Rostek is a director, performance artist and set & costume designer currently living in Berlin. She trained in London at Central St. Martins College of Art and Design and Central School of Speech and Drama. Mahela has worked as a Designer and Assistant Designer for opera, theatre and dance in Germany and the UK, amongst others for Staatsoper Berlin, Bonn Theatre, Southwark Playhouse (UK) and on projects by Silviu Pucarete, Günter Krämer, Vincent Boussard and Choreographisches Theater Johann Kresnik. She also worked in film & TV as Production Designer, Art Department Assistant and Assistant Costume Designer (Arte, ZDF, Sat 1). As a performance artist she developed projects for the Centre Pompidou, Switch Performance (UK) and numerous artist residencies and festivals in Germany.

Elpida Orfanidou
Elpida Orfanidou studied Dance/Choreography in Athens, in Arnhem/ArtEZ Institute, the National Choreographic Center of Montpellier (direction Mathilde Monnier and Xavier Le Roy, ex.e.r.ce 2007) and the Central School of Speech and Drama in London (MA in Performance Practices and Research). Her studies abroad were funded by the State Scholarships Foundation in Greece. In 2009 she was awarded the DanceWEB Scholarship / Impulstanz Festival. Since September 2009 she works in Berlin as a performer and choreographer: “Themselves already hop!” by Hermann Heisig, “X-Schulen” at HAU Berlin/ text, directing by Tim Etchells, “Off Course” by Meg Stuart/Damaged Goods at Garajistanbul,“United States” / H. Heisig – E. Orfanidou, “Sketch” in Luftschnitt Residency#2, ARBEITSWOCHEN CHOREOGRAFIE #5 / Residency in fabrikPotsdam. Elpida holds also a degree in Piano and in Pharmacy.

Peter Davies
Peter Davies is a very versatile musician, who has worked in a wide variety of contexts and genres. After completing a music degree at Cambridge University, he worked as a jazz pianist, choral singer, vocal coach and accompanist, choral conductor, arranger for studio music and cabaret keyboardist. For the last few years, he has mainly worked as a conductor and repetiteur in opera, notably at the Royal Opera House Covent Garden, English National Opera, an ongoing Ring Cycle at Longborough Festival Opera and the Deutsche Oper am Rhein. As a composer/improviser he has been involved in several experimental theatre productions in London as well as a short film, in which he also played a leading role!

Debbie Kent
Debbie Kent (UK) has written plays for radio and stage as well as collaborating on devised and physical theatre productions. She works regularly with Dirty Market Theatre, for which she wrote Bacchaefull, a site-specific adaptation of Euripides' The Bacchae which was named fringe production of the year in 2007 by London arts magazine Time Out. In the past year she's worked on dance and physical theatre projects with Jon Lee, Molina Dance Theatre and Danish/Iranian company Goossun Art-illery.