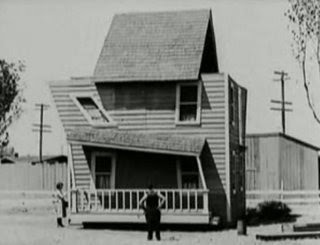 Program
Projection of the shorfilms One week, Cops and Film by Buster Keaton and Samuel Beckett, with live music by José García.

Shortfilms
One Week is a 1920 short comedy film starring comedian Buster Keaton, the first film to be released made by Keaton on his own; Keaton had worked with Roscoe "Fatty" Arbuckle for a number of years. The film was written and directed by Keaton and Edward F. Cline, and runs for 19 minutes.

Cops. This very Kafka-esque film is Keaton's response to the Fatty Arbuckle scandal. Even though the central character's intentions are good, he cannot win, no matter how inventively he tries. He gets into various scraps with police officers throughout the film. Eventually, he unwittingly throws a bomb into a police parade and ends up being chased by a horde of cops. The surrealistic vision of Keaton, small and alone, evading these hundreds upon hundreds of policemen is unforgettable. The filmmaker was both athlete and comic, and here he makes maximum use of both talents, racing down streets, playing a balancing act on a ladder, and casually grabbing hold of a car as it flies past, all in an attempt to evade the cops. When it was first released, this comic short confused many people -- its subtle statements (including its blend of humor and politics) went over the head of the average filmgoer of the '20s.

Film. Samuel Beckett’s only venture into the medium of cinema, Film was written in 1963 and filmed in New York in the summer of 1964, directed by Alan Schneider and featuring Buster Keaton. For the shooting Mr. Beckett made his only trip to America. The film, which has no dialogue, takes its basis Berkeley’s theory Esse est percepti, that is “to be is to be perceived”: even after all outside perception -- be it animal, human or divine -- has been suppressed, self perception remains. Film was edited by Sydney Meyers and the cinematography was by Boris Kaufman, both of whom were preeminent in their fields. Film was produced by Barney Rosset and Evergreen Theater.

Bio
José García was born in Malaga (1978) and today he lives in Berlin. His music, his sound, is based, although not only, in the plastic manipulation of the sonorous information that surrounds me. Million Bass lines, fragments of piano and of any instrument improvisations, accumulations of voices, subjects of the popular classic repertoire, of the historicist academy, ambient sounds and experimental sounds, everything can be deconstructed in samplers, units of loop, to compose a new mass, latent in the present. García musical language does not own the abstraction of the forms of a score, lives in the concrete of the recorded sound, in the basic electronics and in the digital edition by tracks. In a concert, the fragmentation rearticulates in accumulations, repetitions and silences, in a session of sonorous syncretism.