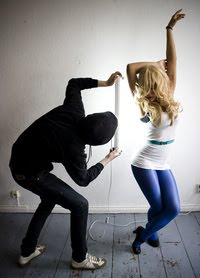 In Isabel Lewis' premiere evening-length solo show she resurrects her depiction of Mr. T, using him and a few other icons as the unexpected reference points of a discussion by way of performance about the strange act of performing itself. Making minimal use of stage design and media elements Lewis tightens the focus around the presence of the performer in an anti-gesamtkunstwerk, using language and movement to frame her interplay of associations and disassociations. Drawing on a range of references from B.A. Baracus to Beckett, Lewis weaves a circuitous narrative about altered states, imagination, connectivity, process, and fiction.

Bios
Isabel Lewis is a New York City and Berlin-based dance artist and curator from the Dominican Republic. She is a graduate of Hollins University (USA) where she majored in both Dance and Literary Criticism. In 2004 Isabel formed The Labor Union along with Erika Hand and presented work at the Cunningham Studios, Dance New Amsterdam, Dance Theater Workshop, Danspace Project at St. Mark's Church, Dixon Place, Movement Research at Judson Church, PS 122, and The Kitchen amongst other venues in Manhattan and the outer boroughs. Isabel now creates solo work, performs with her family art collective LEWIS FOREVER and with Ann Liv Young. She has also had the honor of working with Miguel Gutierrez, David Neumann, Levi Gonzalez, and Crystal Brown. Isabel was a Movement Research Artist in Residence and a Fresh Tracks Residency Recipient in 2005-2006 and was selected to take part in the Meeting Points Artist Exchange in Budapest in the summer of 2008. She has worked as an editor and writer for the Movement Research Performance Journal and was the curator for the dance series, Body Blend, at Dixon Place from 2005-2009. As a curator Isabel has also worked on the Movement Research Festival 2004: Improvisation is Hard and the Movement Research Festival Spring 2007: Reverence (Irreverence) as well as Re-Imagining Utopia, an Austrian and NYC artist exchange, a project of Movement Research (NYC), the Austrian Cultural Forum (NYC), and Tanzquartier Wien (Austria).

Josep Maynou studied Fine Arts in Barcelona (UB), Porto (Facultade Belas Artes Porto) and London (Middlesex University). Maynou has shown his work all over Europe highlighting Getxo Arte in Bilbao, Strip Art and Sala Pares in Barcelona, Galerie Eva Bracke in Berlin and Maoshabitos in Oporto among others. He has been working in different artistic fields and is now focused on media art often collaborating with Berlin-based media artist Arturo Steele. Reusing images and giving them new meanings, he creates visual collages which function as a continuous whole, as complete films unto themselves. The visual and rhythmic coherence of his films, achieved through a process of careful editing, makes reference to the manipulative power of audio-visual media. This process of recycling also leads to installing his work in different contexts such as TV repair shops, warehouses, abandoned spaces and second-hand stores.