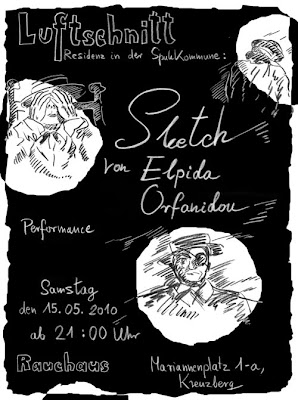 Program
Sketch, a draft study on performing & composing with & by Elpida Orfanidou.

“My starting question was: how can I practice composing by practicingperforming? I was interested in finding ways of “putting things together" through practicing material that I personally find attractive. I wanted to be intuitive and naïve enough. In the studio I started with a range of interests coming from very different fields.
I felt totally lost. I rediscovered ‘Film’ (1965), the only film by Samuel Beckett and I started to work with it. In order to enjoy my working process I returned to my little key fascinations - obsessions. I would like to talk with you about them after the performance. Finally, I came up with a combination of choices, which could be one option. I thought to call it ‘Sketch’ and to share it with you in a very informal evening. I am interested in your view.” Elpida Orfanidou.

"Sketch" by Elpida Orfanidou from Spuk Kommune on Vimeo.

Bio
Elpida Orfanidou (GR) was born in Berlin in 1981 and grew up in Athens. She studied Dance/Choreography at the Professional Dance School of Despina Grigoriadou in Athens (2002-2005), at the ArtEZ School of Dance in Arnhem with Mary O’Donnell as a mentor (Dancemaker Bachelor of Dance 2005-2007) and at the National Choreographic Center of Montpellier under the direction of Mathilde Monnier and Xavier Le Roy (ex.e.r.ce program 2007). In January 2009 she completed (with distinction) her MA in Performance Practices and Research at the Central School of Speech and Drama in London. Her studies in the Netherlands, France and UK were funded by the State Scholarships Foundation in Greece. She also holds a degree with distinction ("excellent unanimously") in Piano (Hellenic Conservatory/2004) and in Pharmacy (University of Athens/1999-2004).In 2009 she was the Greek recipient for the DanceWEB Scholarship at Impulstanz Festival /Vienna .